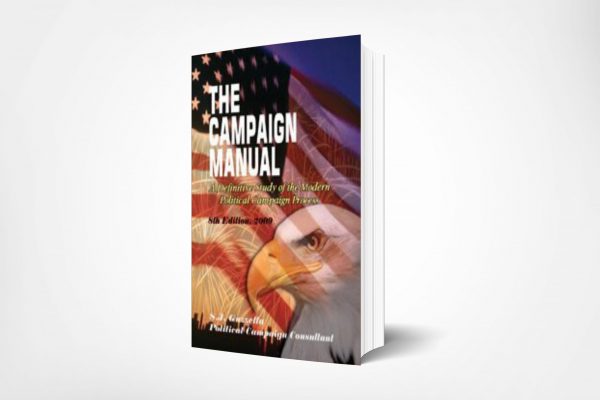 For over 26 years, this book has been the “bible” of the campaign industry. Used by candidates from the President on down to all other political offices in the country. It is the most comprehensive manual available today. A must have for anyone involved in or studying about the campaign process.

The best step-by-step guide available on how to put together a dynamic, winning campaign! Discover how to develop your strategy and to implement the Political Game Plan. Learn how to plan your budget and cash flow schedule. Save thousands of dollars and learn the PAC solicitation “secrets” from the chapter on “How to Pay For It.” Find out who are the 24 key individuals and their roles for a successful campaign. Learn how to establish objectives and design a plan that could improve your odds. Whether you are a political science student or developing a campaign for the Congress,

THE CAMPAIGN MANUAL, 8th ed. 2009, will have the answers you need for a successful campaign.

Included are all of these informative features.

A must have for….

Reviews
A Definitive Study of the Modern Political Campaign Process by S.J. Guzzetta was first published in 1981. Since, it has become the most widely used campaign manual in the industry. It has been sold throughout the U.S. and in 40 foreign countries. It provides a complete and comprehensive guide to running a modern political campaign.

“Only someone with Mr. Guzzetta’s vast experience could write a manual this comprehensive. Not theory, or a potpourri of ideas, but one based on actual campaign experience developed where it counts – in the trenches managing over 35 campaigns and consulting on over 200 more from coast to coast, at all levels. Written in a narrative style, it is very easy to understand”

“If there is such a thing as the “benchmark” of the political campaign industry, The Campaign Manual is it!”

“As campaign technology becomes more advanced, it is even more important that candidates and campaign operatives have access to good training materials. S.J Guzzetta has developed an excellent, comprehensive training manual. It takes a campaign from the announcement to victory. It is a real asset to political education.”

In reviewing The Campaign Manual, Dr. Walter De Vries, Ph.D., had this to say,

“In The Campaign Manual, Guzzetta drives home the point that the way you gather and use information is what campaign strategy and winning is all about….this is a significant contribution to practical campaign politics.”

Dr. De Vries continues, “In The Campaign Manual, Sal Guzzetta has put together an extraordinary practical, easy to read manual on the most difficult and disliked part of American Campaigning ….. fund-raising. An important road map through some tough territory.”

“The manual works extremely well for the course and was very well suited to my teaching method. Students liked it. Significantly, many said that they were planning on keeping the book rather than selling it back to textbook dealers because they think it will be useful to them in the future.”

About the Author
S.J. Guzzetta is a veteran Political Campaign Consultant who is considered by some to be among the top ten of his field. He has managed more than 35 campaigns during the past 35 years and consulted on an additional 200 throughout the United States at all levels of government.

A graduate of California State University, Fullerton, he holds a bachelor’s degree in political science, the American Political Process, with minors in Economics, Communications, and Human Services. His graduate fields were in the American Political Process and International Relations. In addition to graduating with honors, he has the unique distinction of being one of the few individuals in this country to have completed all of his undergraduate work in 18 months.

After ten years as an insurance and business consultant, during which time he was also an active volunteer on numerous political campaigns in New York and California, he entered college with the deliberate intention of becoming a Political Campaign Consultant.

Under the guidance of Dr. Joel Fisher, he developed a curriculum of studies designed to provide him with the foundation for this new career. He is, therefore, the first professional political campaign consultant in the industry. At that time, no other college or university offered a program for Political Campaign Consultants or managers. Today, there are at least three in the country.

Following his academic training, he apprenticed for a year with Joe Cerrell, Cerrell Associates, Inc., Los Angeles, California, working on campaigns in Beverly Hills and Los Angeles. This experience provided valuable on the job training in campaign techniques, especially fund-raising, public relations, and free media communications. Later, he continued his apprenticeship with George Young, George Young and Associates, Inc., Los Angeles, California. For two years, he managed campaigns in California, Michigan and Pennsylvania. While with Mr. Young he developed an in depth knowledge of media production and placement, direct mail, and the dynamics of campaign management.

In 1975, he founded Campaign Management Associates, Inc. (CMA), a non-partisan political consulting and management firm in Los Angeles, California. Determined to provide a “one stop shop” for candidates in order to help reduce a campaign’s overhead costs, he continually expanded the range of services provided. For four years he continued to work on various campaigns around the country in Washington State, Iowa, Wisconsin, Florida, California, and other parts of the country.

During this period he developed and produced VERITAS, a completely integrated voter identification and targeting program. VERITAS assisted candidates and Party Committees in the coordination of poll results, in verifying data input, in generating useful reports, in maximizing the value of direct mailings, in the management of telephone and precinct operations, in fund raising, and in the development of appropriate manuals for campaign staff and volunteers.

In 1979 Mr. Guzzetta moved to the Washington, D.C. area and formed the political consulting firm of S. J. Guzzetta and Associates in Alexandria, Virginia. During this period he consulted on campaigns in Maryland, Virginia, Delaware, Indiana, Texas, Louisiana, North Carolina, Illinois, California, Guam and Michigan. In addition to his campaign consulting, he lectured, conducted campaign seminars, and did research and analysis in a constant effort to improve and refine the basic techniques and procedures used in campaign management.

In 1982, in addition to his other activities, he took over the duties of a publisher at Political Publications and was responsible for developing its marketing and administrative program.

He has participated as a cosponsor and lecturer at the Campaigns and Elections Seminars in Hungary, Czechoslovakia, and Poland. He has also done lectures and provided political assistance to political parties in Taiwan and Brazil.

Sal is now semi-retired and lives in Alexandria, VA. He continues to lecture and to write on the development and management of campaigns.