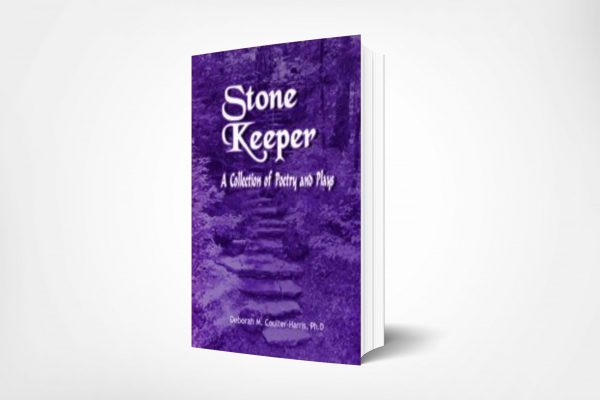 Stone Keeper is the author’s first large collection of poetry and plays, and contains Freed from the Plough and Other Innocent Tales, Stone Keeper, The Hanging Gardens of Babylon, a verse play, and Charmed Like a Snake, I’m Sure, a drama about the CIA during the 9/11 crisis. Freed from the Plough traces the growth and development of a young girl, ending in her awareness of how the world operates. Stone Keeper is a verse dialogue between Stone Keeper and her daughter, and the great pain of losing a golden son. The Hanging Gardens of Babylon, a twopart 11 Act verse play, follows young Daniel’s journey into ancient Babylon where he meets prophets, Imams, and Rabbis; after the hanging of a king, he soon returns home to his Father’s Forest to share his experiences with his friends. Charmed Like a Snake, I’m Sure is a traditional play about fictional characters and events between July and Christmas, 2001 at the Central Intelligence Agency (CIA), when Dr. Mysteria tries to uncover the reason her superiors are editing out Usama Bin Ladin’s location from her reports. The mystery has a surprise ending, after which Dr. Mysteria is ordered to follow a dangerous mission.

Deborah Coulter-Harris (Ph.D. University of Toledo, 1995; MS Business and Human Relations, Abilene Christian University; B.A. English, Fitchburg State College) studied and acted at the Abbey and Gates theaters in Dublin, Ireland; wrote and performed a weekly radio show for RTE in Ireland; worked as speechwriter for the CEO of Mostek Corporation in Dallas; served as Russian linguist in the United States Army; taught at colleges and universities in Greece, Ohio, New York, and Philadelphia, and, served as Middle East Political Analyst at Central Intelligence Agency. Deborah, a native of Massachusetts, has traveled the world— Ireland, England, Sweden, Greece, Mexico, and many parts of America—in various capacities as actress, U.S. Army soldier and linguist, intelligence officer, educator, and writer. Deborah is a widely published poet and recently published Freed from the Plough and Other Innocent Tales, with Tyborne Hill Publishers; her first poetry collection,The Dirt Road, was published in Dublin, Ireland. Deborah’s first verse play, The Hanging Gardens of Babylon, is included in her latest long collection of poetry, Stone Keeper, published by Linus Publications, Inc, 2008. Deborah’s interests include international politics, Middle East studies,poetry, British Literature, world religions,theater, archaeology, and Ancient History.Deborah has an Honors Diploma in Russian from the Defense Language Institute, and is a graduate of the Sherman Kent School of Analysis, Career Analyst Program at CIA.

Be the first to review “STONE KEEPER” Cancel reply